Dr. Adam Spina serves as Superintendent of the Williamston Community Schools. Prior to being named Superintendent, he worked in several different capacities within the district including Director of Curriculum and Assessment, Principal of Explorer Elementary, and taught at both the elementary and secondary levels. In addition to his time in Williamston, Dr. Spina previously served as the Preschool and Elementary Principal with the American School of Valencia in Valencia, Spain and taught with the East Grand Rapids Public Schools.

Dr. Spina is a member of the Board of Directors for the Williamston Area Chamber of Commerce and actively participates in several local service organizations. Dr. Spina retired from the Army as a Lieutenant Colonel and is a veteran of Iraq and Afghanistan. He is a graduate of numerous Army service schools.

Dr. Spina is married to Vanessa Nieto Arroyo. They have two children. 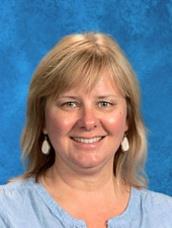 Mrs. Kelly Campbell began her career with Williamston Community Schools in 1991. She spent seventeen years as fourth and fifth grade teacher before joining the faculty of the middle school where she taught English Language Arts as well as literacy interventions. In addition, Mrs. Campbell has worked as an MTSS coordinator at both the building and district level. All of these experiences fueled her interest in supporting students, teachers and families in an expanded leadership capacity. She was delighted to return to Explorer in 2015 to serve as Principal. Mrs. Campbell was appointed Deputy Superintendent by the Board of Education in 2020.

In addition to completing the Professional Preparation Program for School Leadership and Administration through Lamar University, Mrs. Campbell holds a master’s degree in Literacy and a bachelor’s degree in education, both from Michigan State University.

Director of Curriculum and Special Education

Dr. Michele Cook currently serves as the Director of Curriculum and Special Education of the Williamston Community Schools.  Previously she was employed with the Lapeer Community School District serving in various positions. Her former experiences included the district’s teacher consultant position, as well as an autism triage specialist and a secondary special education resource room teacher.  Additionally, she has been a guest lecturer at the University of Michigan- Flint for their education certification program.

Dr. Cook has four grown children and three grandchildren.  Her passion for children extends beyond her family.  Her goal is to engage learners and foster success for all students.

Sarah Tynan serves as the Director of Finance of Williamston Community Schools. Prior to accepting this role, she had worked for over two years in public accounting, specializing in tax for both construction and manufacturing & distribution clients, as well as two and a half years in the private sector of accounting.

Sarah earned her Master of Accounting from Walsh College in 2019, as well as her Bachelors of Science from Michigan State University in 2014. She has obtained her license as a Certified Public Accountant in the State of Michigan and has held her license since February of 2020.

When she is not working, Sarah enjoys spending time with her family and pets, competing with her horses, and renovating her 1950s farmhouse.

Dr. Delp holds Doctor of Philosophy and Master of Arts degrees in K-12 Educational Administration and a Bachelor of Arts degree in English, all of which were granted from Michigan State University.

Dr. Delp and his wife Gina are the proud parents of boy-girl twins.

Mr. Chris Armour currently serves as the Assistant Principal of Williamston High School. Mr. Armour was hired in 2010 and has taught a variety of math and science classes at both the Middle and High Schools. Outside of teaching, Mr. Armour has served in various roles in the district including coaching football and wrestling, science department chair, as well as the President of the Williamston Educational Association.

Mr. Armour holds a Master of Arts in Educational Technology and Bachelor of Science in Physics degrees from Michigan State University.
In his free time, Mr. Armour enjoys watching sports and spending time at the family cottage with his wife Jayme and their three future hornets.

In addition, Mrs. LaFleur enjoys community service and traveling with her husband Andy and two daughters.

Mr. Adam Supianoski currently serves as Assistant Principal at Williamston Middle School.  Prior to his employment in 2022 at Williamston Middle School, he was employed by Coldwater Community Schools for seventeen years, where he served as the middle school Assistant Principal.  Before moving into administration, he taught social studies, math, and physical education at the middle school level as well as taught at the elementary level.  In addition to teaching, he also coached football, basketball, and track at the middle and high school levels.

Mr. Supianoski and his wife Kate have two children and enjoy spending time together traveling and attending sporting events.

In addition to earning an education specialist degree from the University of Michigan - Flint, Mrs. Pfander holds a master's degree in reading from Eastern Michigan University, and a bachelor's degree in elementary education with an early childhood education endorsement from Alma College.

Director of Facilities and Operations

Mr. Brandon Weingartz currently serves as the Director of Facilities and Operations for Williamston Community Schools.  Previous to joining Williamston Community Schools, Mr. Weingartz worked for the Detroit Tigers as Manager of Park Operations for over 10 years.  In the years spent with the Detroit Tigers, some memorable experiences include attendance at seven Major League Baseball All-Star games and assisting with the production of the Red Carpet Parade.

Mr. Weingartz earned a Bachelor’s of Science in Business Administration from Central Michigan University.  Mr. Weingartz is a member of the International Facility Management Association.

Mr. Weingartz and his wife Katie have three daughters.  In his free time, Mr. Weingartz enjoys spending time with his family, being at Higgins Lake, hunting and fishing.  Mr. Weingartz also enjoys sports and has been to 15 Major League Baseball stadiums.

Director of Athletics and Enrichment

Mr. Paige Paulsen serves as the Director of Athletics and Enrichment for the Williamston Community Schools. Prior to his tenure at WCS, he worked in the same capacity with the Grant Public Schools where he also coached varsity girls’ basketball.  Mr. Paulsen previously coached NCAA Division II basketball at Wayne State College in Wayne, Nebraska.

Mr. Paulsen earned a master’s degree in organizational management from Wayne State College and a bachelor’s degree in sociology for the University of Wisconsin-Milwaukee (UWM). He was a member of the basketball team at UWM from 2005 to 2008. After the conclusion of his college career, Mr. Paulsen played professional basketball in Spain.

Mr. Paulsen is married to Morgan Paulsen, they have two children.

James Davis currently serves as the Food Service Director of the Williamston Community Schools and the Haslett Public Schools.  Prior to being named Food Service Director, James held positions as Director of Culinary for Notre Dame Preparatory School and Marist Academy as well as Director of Dining Services for Saline Public Schools.  James brings 35+ years of food service experience, a wealth of knowledge, and an incredible passion to the schools and communities he serves.  In addition, James also holds his Foodservice Management Professional (FMP) and ServSafe certifications.

As an Army veteran, James is very active serving and volunteering within the veteran community.  He is a board member and the treasurer of Veterans Connected, a charity dedicated to connecting veterans and families to resources within their communities.  James also volunteers with the Reboot Recovery Program that assists veterans and first responders who experience post-traumatic stress.

James is married to Victoria Davis and enjoys spending time with family and their three grandchildren.

Director of Preschool and Child Care

Mrs. Olsen has been employed with the Williamston Community School District since 2000 and is now assuming her new role of Director of Kids' Corner and Little Hornets Preschool. Through her years at Williamston, she has been a teacher to the district’s youngest learners in the Little Hornet Preschool programs. Concurrently with her teaching position, Mrs. Olsen has also served in the capacities of Early Years MTSS Coach and Early Childhood Specialist focusing on program and teacher professional development. Prior to Williamston, Mrs. Olsen worked as an Early Childhood Specialist at Lansing Community College Early LCC and Oakland University Lowry Center.

Mrs. Olsen earned her Bachelor of Science Degree in Child Development from Michigan State University with post-graduate work in Curriculum and Instruction from Oakland University.

Mrs. Olsen is married to Brad Olsen and together have one daughter.

Prior to Williamston, Mr. Doyen worked as a smartphone, tablet, and laptop repair technician at iCare Repair in the Meridian Mall.

Mrs. Pam VanSickler currently serves as Supervisor of Transportation and the Building Use Facilitator. Prior to working in this capacity, she worked in the school business office as the personnel clerk.

Mrs. VanSickler is a proud 6th generation graduate of WHS, her three children were the 7th, and her grandchildren now attend to become the 8th.